This is the page where you will find out everything that is happening in Diddyland. Check back often for all the latest info.

Fans of Diddums and downloading/streaming music will be pleased to know that the single "On the radio" is now available from Amazon and itunes as an instant download for less than the price of a Caramac bar. Spotify users can also enjoy the Diddums first ep as well as the latest single all for a bargain price of Fuck All!

The recording stage of the Diddums debut album is drawing to close, tentatively titled "Party Hits Vol 3" and is chock full of blistering power pop ditties old and new including "Dancing With Another Guys Girl, Never Missed You, Psycho Girl" and many more. No release date has been decided on but it could be this summers must have record.

The word on the street at the moment is that the lads WILL be playing both Wickerman and Belladrum festivals this year at the end of July and beginning of August. It's all a bit hush hush at the moment more details will follow when released.

Diddums album on the way

The boys have stared work on what is to become their debut album.  Word on the street is that it should be released early next year and have 10 tracks of blistering power pop based guitar tom foolery. More details to follow...
19th October

The long awaited Diddums single On The Radio/Fools paradise has finally been released on distilled records. It is available as limited edition white vinyl 7inch picture sleeve from  http://www.distilledrecords.com/shop.html  with free download or you can also grab it from itunes or amazon as a download only
28th Aug:
New Video Released.
Diddums have released their cracking new video slightly ahead of the single release in September. The promo is a tongue in cheek "live" performance of "On The Radio" one of the sides of the double "A" side release. The actual single will be available in beautiful "New Wave" white vinyl and download only. 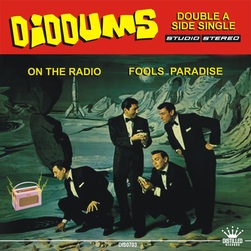 The release of Diddums double A side debut single on Distilled Records  is scheduled for September and and will be available as a limited edition 7" coloured vinyl record and download. The record will feature two cracking tracks, On My Radio and Fools Paradise, both produced by Steve Mason. Stay tuned to find out how to get your hand this piece of rock 'n' roll history.